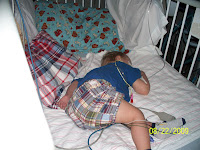 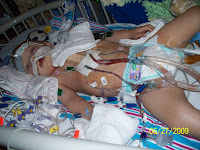 When Karen and I made our decision to bring Tucker here for his whole heart repair, it seemed like an easy and simple decision and we had months to prepare. As the time grew closer, the anticipation and excitement of Tucker having this heart repair and the thought of him having a healthy heart was almost too good to be true. When the day came, I almost dreaded leaving. Karen left with Tucker first and I was home alone. This is when it hit me, this might be the last time Tucker is ever going to be back in this house!! I may never get to see my son again. If you have never had that feeling, it is something that I just can't explain. If you have, then you know exactly the way I felt.
After the surgery, the ups and downs we went through were taxing on us to say the least. Several times we asked each other and ourselves, what if Tucker doesn't make it through this, did we make the right decision to elect to have this surgery now, even when he doesn't need it RIGHT NOW? The doctors re-assured us that we made the correct decision and the younger he is, the quicker he recovers.
We are not out of the woods yet, but I have seen our little superman fight each day and make an improvement, some days more than others, but improvements. We are finally getting to the point where I can see some light at the end of our tunnel. He wants to be held, gives kisses and hugs, tells everyone he sees "Hi".
If I were interviewed by a parent wondering if they should do this surgery, I would say absolutely. With the friends we have made who have been through this journey also, I would recommend it to anyone. I won't lie, it's full of good days and bad, ups and downs, thoughts of "What If" run wild through your mind, but in the long run, I believe we have gone through something truly amazing!!

You have experienced one of God's Greatest Gifts, it is a 3 in l deal. Faith, Trust, Belief. How about that ? God is so Faithful.I am so happy for you all, and I know God has something very special for Tucker to do. Love you all. Mary Ellen

He is looking good..You know also Tucker couldn't have done this without the love of his wonderful parents by his side...you never gave up on him you may have felt like there was no light at the end of the tunnel, trust me I know, but with the love and the strength that he felt each and everyday you were by his side..I believe that, it makes theses kids stronger..I hope this makes sence..it's been a long day around this house today..n e ways I'm glad that he is doing so well

I remember that sick feeling, but knew we had to go. And once there, never doubted...and Im so glad you guys did too. Yippee soon there will be another whole heart in KC!
Thank you Lord.