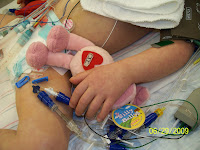 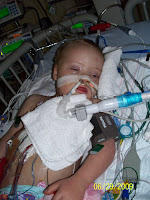 OK, so yesterday was extremely quiet. We actually got out and walked around..Sheena and I were in flip flops which was not the best idea. We saw Fenway park and tried to find the Harley shop but when we did, they had closed it down. Then we ate some dinner and came back to the room. The girls headed back to the sleep room and Todd and I hang out until I couldnt keep my eyes open anymore. I think I was alseep way before 10 and had very little awake time last night. We had a great nurse that takes good care of Tuckman. (as you can see the stuff on his forehead is gone, the first of many things to be taken away....yeah)
Yesterday they worked on getting Tucker in the right place with the medicine mix. They added methadone and ativan, on top of the morphine. They are a constant drip. Then when they mess with him he gets bullous doses of versid and morphine. They are weaning him from the morphine ever so slowly as they tend to withdrawal after days on it....hence the methadone and ativan. With this new mix his pressures have stayed in the teens where they want them...but he isnt awake and moving around either....so we will test him again today.
They did an echo yesterday as well to check heart function. It all looks really good. His left side is pumping, very little leakage around the valves....very little as in hardly worth mentioning the doctor said. He is still peeing very well, getting that fluid off. They do an EKG once to twice a day right now. His heart is currently being paced, meaning it is on a pace maker making it beat so many times in a minute. This is done so that the heart is beating fast, pumping more blood through it, trying to make it used to the new plumbing. Each day they come in and take the pace off, letting Tucker do the work to see what the heart rate is and to ensure it is pumping in sync. Well, Tuckers heart is not in sync. His rate is good but the heart is not pumping all at one time, one chamber pumps then the next currently. This was not the case right after surgery so they are not too concerned at this time. Sometimes it takes a while for the heart to get back "in sync". They would be more concerned if he had never, since surgery, been in sync...but he has. So the pacer wires will stay in until that fixes itself. Worse case, absolute worse case, is that the heart doesnt and he has to be paced all the time...then we would look at putting in a pace maker. They really dont anticipate that but it is always a chance.
We received a care package yesterday from Kim, Wills mom. It was like Christmas... a pillow case for Tuckers pillow, a laundry bag, laundry soap and change for the machines, a razor (OHG how I needed that)all kinds of goodies. Thank you Kim. We also received dinner from Michele, I might have mentioned it...I cant remember but wanted to say thank you to her as well. (Enchiladas were great!!)
So today is just about getting the paralyzing medicine off and let him move around a little. The goal is to get him off the vent within this week....so things could progress quickly, praying for that anyway. I will post when I get new news or something happens other than that you can assume all is quiet.