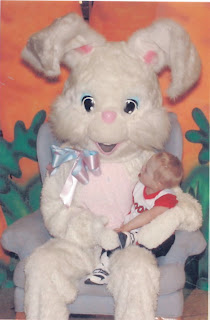 We made it to the hair cut, which took over an hour. He was so good last time and this time I had to hold him down again. UGH…talk about stressful for me and for him. Thank goodness Aunt Shelley was patient. It looks good, spiked in the front and short all over. As soon as it was done Hunter made mention that he looked like Chelsea now. (Our little friend that had her head shaved during her cancer treatments) I must admit, they do look similar even more now. As we all are aware, T21 kiddos look alike in their features anyway, throw in blue eyes, blonde hair and a smile that will knock you out…..two peas in a pod.
So, after the grueling hair cut we headed off to Metro to get the picture with the bunny. NO LINE…yes, maybe it won’t be bad. HA. He didn’t like the bunny, didn’t want to sit with the bunny. Started throwing his head back and straightening his body, he was possessed!!! SO, bunny hopped into action and actually started talking to him. I think this is a no no in the “Bunny” code of ethics. I have NEVER heard someone talk from under the suit….but it worked and this is the picture we got. By the time we were done, YUP there was a line!!!!