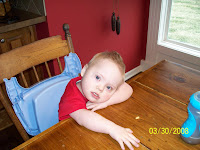 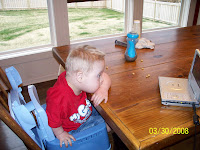 Tucker finally used his reverse walker this weekend. I had brought it home from preschool about 2 weeks ago now. He wouldnt touch it, no way...it was used for therapy he wanted nothing to do with it. I would put him up to it and his legs would remain out straight infront of him as if he was sitting on air.
I attempted once again and he took off. 12 laps around the downstairs. Kitchen, dinningroom, livingroom, hall and back into the kitchen. Didnt want to stop. He does really well with it but tends to keep his head down. I have to walk behind it as it turns pretty wildly, so I try to help control the speed and turning from behind..encouraging him all the way. He is growing so....
The next thing. Grandma T picked up a booster seat for him. It is nice and he feels big up at the table with us eating. I am hoping that it will encourage him to take part in our eating times and eat better......I am putting a lot into a 20.00 chair but who knows. He eats soooo good at school, where he sits with all the kids, pulled up to the table...I just thought, who knows. Lets try it.
The pictures here are of him at breakfast, watching his signing time and eating sugar smacks. The video is after his breakfast and Hunter let him sit beside her as she ate hers......as you can see he knows how to hike that leg and get onto the table. ONERY....but how can you be upset.