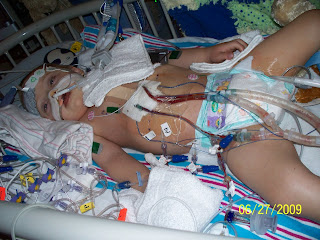 So, they just rounded and here is the plan for the day. A new line will be put in the other groin and in his arm/hand/wherever they can find it. The line in his neck is now misplaced and they cannot call it "central" line any longer....but they can continue medicine through it. That line will be taken out once the other i.v's are put in. He has pee, did good output all day yesterday and we have officially put out more (500 cc's more) than we have taken in, which is very very good. They dc-d (discontinued) the dylaril (the other diuretic to get flood off) and he is now just on lasix. They talked about putting something in his belly and getting the gut going....and after all this is done they will try to wake him. Wake him as in take off the medicine that paralyses him. He will still be sedated but he will be able to move his body. At that point, all pressures, everything will be monitored very closely..and in all reality he might just have to be put back to sleep. They usually see pressures go back up, oxygen level in blood go down, heart rate go up...all signs showing he is not ready....they have warned me so we wont freak out if and when it happens.

This is what I will not be able to handle. Him seeing us, feeling all the stuff hooked up,,,,and he is going to freak out. This is what I don't like, the helpless feeling of him laying in the bed, AWAKE, and I cannot do anything but try to sing to him, touch his head and try to soothe him.....this will be the longest and hardest day for me.....

So that is the plan for the day....but we all know plans change. It is the "game" that is played during surgery, during recovery.....plans are not in our hands or the hands of the doctors....the plans are on Tucker time.....slow and steady.

Today will be a challenge, but you will all get through it. Things will be okay. *hugs*

I hope all of the iv placements and such take well and there is no need for more re-do's than necessary.

Call if you need anything. We will be out for the afternoon so call my cell.

Just wanted to check in real quick..and see how Tucker is doing. hang in there and stay strong..give me a call if you need to I'm still praying for Tucker, and you for strength!

It seems like our kids are always hard sticks. I know Addy is. I don't know how many times we have to redo IVs and central lines. Poor little guy! Praying for you!

Thanks for keeping us all updated via website. We will keeep Tucker and family in our prayers. Love you guys.