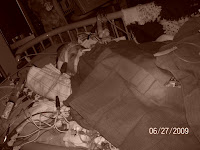 Well....it is like 3am and they are doing a procedure at Tuck's bedside. His i.v. that is in his groin is clogged or something. They cant drawl any blood from it....so they have to thread another one through the vein and take this one out. This particular spot also has a line in it that monitors the arterial pressure. This is the i.v. that they drawl all his blood gasses from, so as to watch all the settings on his ventilator, to ensure he is properly oxygenated.
This is the same vein that they used to do the heart cath on Tuesday-it goes into the heart, the vein that is. I can vaguely remember this being done at one of Tucker's other surgeries as well. Although at that time we didn't have one in the groin and they put one in at bedside. Tucker has terrible veins in that you cannot see them and they seem to collapse and go bad. It is not uncommon during one of these visits that he gets new i.v's a lot. The first heart surgery they had done so many that they ran out of spots and had to put one in his head....UGH. It was a good, thick vein though and stayed until they took it out because it was time to take it out.