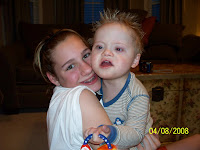 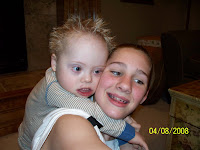 SO, they are doing the entire floor in the kitchen tomorrow. They have stained and poly x2 coats. So tomorrow morning they will buff the entire floor, which also runs to the entrance of the house, and put a satin poly on it all. SOOO, there will be no getting into the house for 24 hours. The kids and I are going to moms tomorrow after work. Todd is heading down to go see the Navy recruiter with Brett tomorrow so he wont be here either. By the time I come all the way north to get Hunter from school and get back to moms it will be time, pretty much, to go to bed. Then I will have to leave her house about 630 on Friday am to get Hunter to school, Tuck to school and me to work on time.....WOW. What a mess!
Tucker is growing so fast. We had our nutrition visit tonight. He only gained 3 oz. but grew 1/4 of an inch. He is now 33 inches tall. Weighs in at 24.12 lbs. He is trying so hard to walk. I am posting a video of him. He is just so funny any more. He says words just out of the blue. His big thing is pretending on the phone. NEVER has he made a noise when you put it to his ear with someone on the other end....that is until tonight. Todd is at the range qualifying for his night fire and I let him talk to Tucker. I said "say Hi DADDA", Tuck said I da" Todd asked me, was that you or him. It was all Tucker, not only did he say that but he jabbered quite a bit more. YIPPEE WHAHOOO!! He has also been walking more and more. The other night he took 12 steps without falling down. He gets such a kick out of us applauding him that he falls and gets right back up to do more. The therapist even made a comment about his balance (he stood today for 2 minutes without falling and no support) and his stamina. He loves to dance. Music comes on and his shaking his butt or on all fours "banging his head". He is super quick with the bear crawling and climbing the stairs now. He will hunt you down, no longer can we hide upstairs. That is a really good thing! Soon he will be running in the house and I will be yelling to stop running in the house.
I am also posting a few pictures of Tuck and Hunter last night after Tuck's bath. I spiked his hair really good,,,he is so darn cute. He is feeling better, still sniffling but the nose drops are helping tremendously. No more fevers, not sure he really had one as he wont let us put the darn thermometer under his arm-he felt warm but cooled right down after getting over his morning coughing fit. (He has those when he is congested)
I bought a VHS signing time video when they had them on clearance. I had tried it one time with him, it is #8-about the outdoors- he was not interested but I have popped it in tonight and he is mesmerized. Hence, my long post--thank goodness for Rachel Coleman!!! She has really made Tucker's and our learning sign so fun and easy. OK, so there he is at the top of the stairs yelling at me now......he is done watching and knows where I am.

sounds hectic but it will be fun to have a sleepover at your moms.