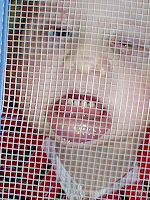 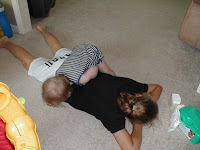 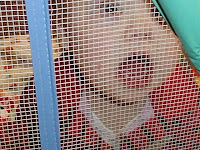 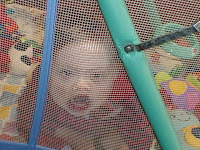 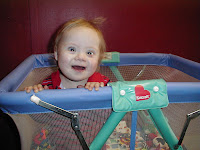 Tucker learns something new every day. He has learned he can pull up in his play pen and that if he smashes his face against the mesh sides he can get his bottom teeth stuck in the mesh. I have attached some of the pictures. They look scary but I assure you he was having a blast.
Let's see what else is new. He likes McDonald's cheese burgers, no bun just meat and cheese, yogurt, cheerios, chicken pot pie (homemade by mom), ice cream, graham crackers, summer sausage and pudding. Pudding has been introduced a few times, he is back eating it again. We are getting away from the baby foods, trying to get more table foods in. It is so hard sometimes because we don't always eat something we can smoosh up for him, but we try. When all else fails, cereal works. Oh yeah, cereal...Sugar smacks with some milk....LOVES IT, oh and the dried marshmallows from Lucky charms (magically delicious)
He is crawling over us when we are laying on the floor. (as seen in picture above) He thinks it is so fun to fall off the other side of you. He signs "all done", "more" and did "ball" today with the Speech therapist. He has gained 5 oz in a month, now weighing 23.10 oz. His head grew but length stayed the same. He is still on the "typical baby" chart..which is awesome. He is like in the 50% for height vs. weight chart. YEA!!!! He flipped himself out of the tub the other day, and yes I was watching him very closely. He pulls himself up to stand in it and leaned a little too far over, flipping right into my lap head first. We are working on several things...balancing while standing, circles placement in the shape sorter, crawling through a tunnel, moving his feet side ways to use both sides of the brain, pointing and signing "mom", "dad", "please", "thank you". He knows what NO means and tonight I actually got him to leave the bar of soap alone while taking his bath by telling him NO. He DID NOT TOUCH IT, he moved his hand towards it as if to say "if i can only touch it" but as soon as I said NO again he took it away. That is not always the case but I was very impressed with him doing it tonight. OH yea and he can pull up on the toilet now too....gotta keep the lids down now, he loves the water!!
Well, family and friends, I am off to bed while Tucker is sleeping. He has been sick the past few days. I am not sure if it is allergies or teeth or what. He is very congested and junky sounding, noise breathing. He had a fever a few days but seemed to keep it away today. I don't think it had anything to do with daycare, he was sounding raspy before that day. Mowing yards and grass growing and things budding don't help.