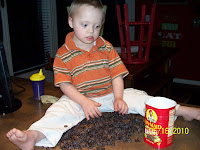 I guess the small amount I gave to him just wasnt enough....he had them under him and up his pant leg.
Tucker was saying the letters of his name tonight when he looked at them. T U C K, then when he realized I was wanting him to continue so,,,he was done. It is amazing how much he catches on to things and remembers things. He is also tapping his finger on his chin and saying "HMMMM, lets see". He does this at just the right times as well,,,like when he is trying to decide what it is exactly that he wants to eat while looking in the snack cabinet. He has started counting, while standing against the wall, then saying "ready". Like playing hide and seek. So many things. He pottied in the potty the other day again. I am going to try to get him completely trained while we are on our weeks vacation in June.
We attended a Community Church today with some very dear friends. I think we will go back next week. It is a very contemporary church, something we are not used to, but I felt at home for the most part. It was nice to attend a worship service, it has been so long since we have attended anything. It was so hard with Tucker sick, we were so afraid to expose him to anything other than the necessary. Now, I have no excuse. We definately need to be closer to our Heavenly Father and his teachings. Today was the beginning. (thank you Lisa and Gary for making us feel welcome)

My name is Sarah said...