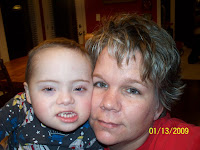 Todd and I actually got to go out tonight. Tuesday was his birthday and he worked. SO, I had a sitter tonight and we went to have sushi (yuck, but he liked it) and then I dropped him off at Dave and Busters where he met up with some of his buddies that I had called and arranged to meet him there. He wasnt real hip on the idea at first, even made me go in with him...claiming he was too old and too stuffed to drink and hang out all night. He wanted to go home and sit on the couch and relax. I pointed out that he sits up til 1am every night anyway, go and enjoy your buddies. SSOOOOO, I walked him in and he instantly told me it was OK to go, he would be fine. (just needed that little push)
It is so important to get time with your friends....SO important. Not that I wouldnt have loved to go and watch a movie or something with him, but he deserves to relax and enjoy without me.
So I came home and Tuck and I are chilling out. Here is our "self picture" I took while holding the camera....he is saying cheeeeese, can you tell?

Very nice picture. Tucker is such a cutie. Happy birthday wishes to Todd. I think of u guys all the time and I still carry the heart you gave me. Heart Hugs.

What a great sitter, I do say so myself!! haha. I had a great time hanging with Tuck Man!