Home and back to "crazy" normal 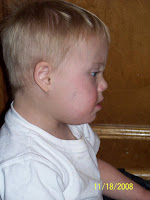 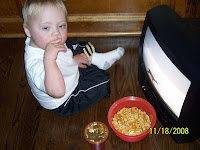 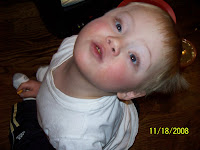 I was off on Monday, nice because the kids were in school and that gave me the day to recoup! YEAH RIGHT. That gave me a day to get groceries, scour three toilets, do loads of laundry, start some chicken and noodles (homemade) and try to do a few other things. By days end I was pooped and Tucker was raring to go! Tuesday Hunter has a concert with Honor choir and I am back to work, so is Todd, life is back to what we call normal. Running and pretending like we know what is going on.
Tucker is going all the time now...what is that saying again-Be careful what you wish for, you just might get it. Well, we sure did. He is into everything. Busy busy. I cant wait to see what he is going to do with the Christmas tree this year. He didn't care about it too much last year...HA, this year though--my prediction is I cannot keep him out of it, touching, knocking things off, tearing open presents...yup that is what I wanted. A normal, busy, toddler and I have it. YEEESSSSS
He is talking more and more, well making the sounds to talk. He has certain words he says in his own way...like Bambi is Ba bee(which is his fav movie). He weighed 28 pounds today when they weighed him fully clothed, which means he has gained a pound since the last time they weighed him, which was fully clothed as well. The ladies at the Doctors office today were so impressed with him, the fact that he is a Hypo Left heart and so active and pink and so WELL. I seem to forget all to quickly that Tucker is our miracle. With his heart we are so darn lucky he is doing so well. The on and off again illnesses are nothing compared to what he could be, which is oxygen all the time, under weight, and under active. I am indeed grateful.
OK...explaining the pictures. I tried so hard to get a good one, he just loves to sit with his cup and snack in the dinning room watching Ba bee. Every now and then he will load up with his cup, yogurt or whatever it is he is eating and head to the living room to check on the rest of us. Cup under one arm and whatever else in the other......he is getting so big. He even tries to wipe what he spills up with his spoon ....cute but not so great on the carpet.

What a cutie pie. I can't get enough of his pictures. Don't you just love seeing them trying to be responsible at such a young age...it is priceless. I am glad you guys had a good time in Vegas. Looks like a lot of fun!!!

Normal is good. Glad to see you back and on the go again.